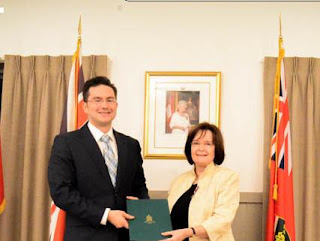 The Diamond Jubilee Medal was struck to commemorate the Queen's 60th anniversary of her accession to the Throne.  Nominations are handled by Members of Parliament, Provincial Lieutenant Governors and Premiers; plus a number of Non-Governmental agencies.

This presentation, at Kars, ON (a small village in the MP's riding) carried the theme of honouring "rural champions".  Those rural champions deservedly included Glenn Brooks (a local municipal official who served for over a decade and advocated for farmers), Paul Mussell (a local comedian who pokes fun at rural life) and Mrs. Marion Newman (a local teacher who volunteered to promote Agriculture in the Classroom).

Unfortunately one of the medals was tarnished by being awarded to an anti-wind activist via a number of her political allies.

Jane Wilson, the recipient, is (or certainly was) Chairperson of the North Gower Wind Action Group ever since a project was proposed in her area.  She is the current head of the anti-wind group Wind Concerns Ontario.

Lisa MacLeod is the MPP for the riding.  It appears that MacLeod is part of a PC campaign to take Ontario's energy system back to the virtual stone ages.  It is now PC Leader Hudak's stated policy to place nuclear energy over any other sources of electrical power generation in Ontario, while reversing all advances in renewable energy by repealing the Green Energy Act .  They intend to replace renewable energy with nuclear power based on a lop-sided tender.  Nuclear supplier 1 would compete with nuclear supplier 2 but neither would be required to compete with wind, gas, hydro or solar - because nuclear would lose every time based on cost and risk.

Put another way, nuclear would be guaranteed a price premium that ratepayers would be required to pay for decades.  Even as the whole world turns away from ridiculously expensive nuclear power (not to mention safety issues revealed by Fukushima), the PC's want to return to the 1970's.

Pierre Poilievre is the MP for Ms. Wilson's riding.  He was somewhat late into the wind turbine fray but joined on when the federal Conservatives's joined in the provincial anti-wind fight a few years ago.  At some point, the provincial PC's and federal Conservatives in Ontario realized that they had a common cause.  They could disrupt the provincial Liberals' wind file.  Perhaps these Conservative ties also had a hand in Health Canada's unprecedented $2 million study on the possible health effects of wind turbines, even though 17 other studies had found no connection.  For their own purposes, they ignored the fact that the University of Waterloo had been conducting an identical study for many months in Ontario.

Mr. Poilievre maintains a website.  Here are some examples of how the three have collaborated:

Plus this article from EMC Manotick dated August 23, 2012:  http://www.emcmanotick.ca/20120823/news/Poilievre+launches+petition+to+stop+wind+turbine+project

What this constitutes is an unholy alliance of the federal Conservatives and provincial PC's and Wind Concerns Ontario, at the very least in Nepean.  The provincial PC's played off the NIMBY attitudes of urban weekenders who threw their farmer neighbours under the bus.  The federal Conservatives also threw their farmer constituents under the same bus.  In the picture below, you'll see a small bunch of wind protesters plus their MPP, Lisa MacLeod (left, in the black suit with the capri slacks),  their MP Pierre Poilievre (centre, in the open neck blue shirt holding the sign) and Jane Wilson (right, in the black top and slacks).   We suspect that there weren't a lot of local farmers in the picture (farmers seldom wear sandals), plus farmers like the fact that turbines provide income and don't disrupt farm operations. 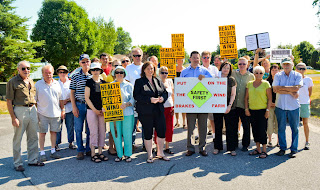 We don't think that a Commonwealth Medal should be so brazenly exploited politically.

There are so many people who are investing their reputations and their personal finances to advance renewable energy - including most of the country's top banks.  Developers risk hundreds of millions of dollars in projects based on a 20 year contract with the Ontario people.  They get paid off the meter, i.e. by the kWh.  If they spend too much on their projects, if they misgauge the energy potential of their site or if their technology under performs, they take the hit and go bankrupt.

This is in stark contrast with nuclear operators who receive forgiveness when their projects go over budget - and they go over budget EVERY SINGLE TIME.  Ontario is still paying off their stranded debt .

In our opinion, it's the real risk-taking pioneers, the landowners, the developers and the municipal leader and politicians who have stepped forward to clean up this province's ancient electricity system who deserve the Medal.  They bring much to the rural economy - in fact, they have saved many family farms and contributed income to rural economies.

What have wind opponent's done?  Nothing.  Absolutely nothing, other than creating hysteria and political mischief.  And yet they get a medal.

What's wrong with this picture?

Posted by Ontario Highlands Friends of Wind Power at 12:34